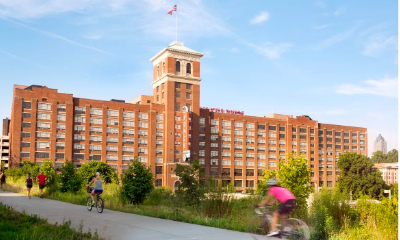 Search all Old Fourth Ward, Atlanta houses and real estate listings below. Old Fourth Ward is a historic neighborhood within intown Atlanta that is most notably known as the birthplace of Martin Luther King Jr. and for where significant stretches of the Beltline Eastside Trail are located. In recent years, a surge of development and investment has resulted in Old Fourth Ward becoming one of Atlanta's most desirable neighborhoods.

Be sure to sign up for a free account so that you can receive email alerts whenever a new listing (that matches your criteria) gets listed in the Old Fourth Ward MLS.

Homes for sale in Old Fourth Ward (O4W) have significantly risen in value over the past few years. This is due to a surge of development and new amenities, such as Ponce City Market and the Eastside Beltline Trail. However, many different condo buildings and townhomes in Old Fourth Ward still remain relatively affordable.

Old Fourth Ward has a mix of both old and new home styles. You'll see 1920s-style bungalows and smaller ranch homes intermixed with large contemporary behemoths. Most of the homes are designed for smaller slots (<1 acre), so you won't find anything resembling mansions.

Starting in 1847, Atlanta was divided into political divisions called "wards". These wards represented political divisions where each ward elect their own representatives. The ward system ended in 1954 with the reinstatement of city-wide elections. The location of the "Fourth Ward" was renamed to Old Fourth Ward. Curiously, Old Fourth Ward is the only neighborhood named after the ward system.

Starting in the 1950s, Old Fourth Ward and surrounding neighborhoods began to slip into economic decline starting. Streets like Boulevard were transformed from being lined with beautiful Victorians to rife with decay and criminal activity. A concerted revitalization effort has been ongoing since the 1990s that helped spur real estate development. The neighborhood is now more desirable than ever, with a swarm of new houses, apartments, restaurants, and shops.

A good portion of the Atlanta Beltline Eastside Trail is located in Old Fourth Ward. The trail links you to some of Atlanta's top neighborhoods like Midtown, Inman Park, and Reynoldstown.

The most notable park in Old Fourth Ward is the Historic Fourth Ward Park. There's a splash pad and playground for children and ample green space for picnics or walking. Best of all, there's a beautifully designed retention pond that is a favorite for photo shoots.

Are you interest in homes for sale in Old Fourth Ward and thinking of buying or selling here? We would love to be of assistance! We're a team of real estate agents with intimate knowledge of the area.

As one of our clients, you'll get the most recent data for average Old Fourth Ward home prices, sales history for any property, and information about the broader real estate market.

The one school located within Old Fourth Ward is The Kindezi School. They are a K-8 school with extremely small class sizes.