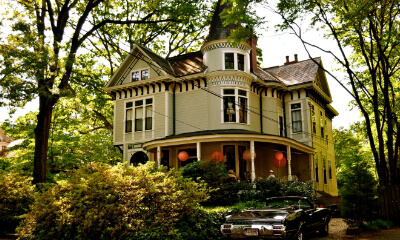 Find all Victorian homes for sale in Atlanta. True Victorian home styles date from the late 1800s as America started to explore innovative ideas for building designs. Built between the 1840s and the 1940s, every Victorian home combines these styles uniquely, meaning that each Victorian home is one-of-a-kind.

The homes below are being displayed by newest homes first. If you find something you like, feel free to register for a free account, where you can receive alerts when new Victorian homes hit the market.

Victorian homes have distinctive romantic details, abundant with textures and patterns cover a combination of Victorian styles that include:

While there is a wide range of styles included in the Victorian style, there are several common characteristics that are easily identifiable.

Most Victorian homes built in Atlanta are on small lots that are typically only one or two rooms wide. This means that the main level commonly sits partly below ground, then two or more levels perch on top.

Some Victorian homes look more like mansions. Their sweeping spaces inside translate into unique exterior features, like towers and turrets. These asymmetrical flourishes create spectacular curb appeal from the outside while acting as bedrooms, parlors, or studies inside. Tiny balconies and crow’s nests also are also classic Victorian home features.

In contrast to other housing styles, Victorian homes are typically asymmetrical. So, the entryway is not centered and the two halves of the building are not the same.

The complex paintwork on a Victorian home will make it unique, even in a row of similar houses.  The intricate collection of wood designs create complex patterns and one-of-a-kind facades. Expect to see:

While many of the intricate details appear to be hand-carved, they were actually mass-produced. The dawning of the machine age in the early 1900s proliferated the use of these captivating details.

Benefits of the Victorian Home

The charm of any Victorian style is hard to deny. While some of these homes are sweeping and glorious, others are narrow and tall.  The most coveted feature of a Victorian home is its uniqueness. You can be certain that your home will be unlike any other.

Victorian floor plans are designed for US lifestyles, usually with a main living floor and bedrooms upstairs. Often renovations have opened up living areas for great rooms where separate living, dining, and kitchen areas were before.